When I checked in for my flight last night I saw a new option for a mobile boarding pass. “About time” I thought and eagerly chose that option, how many others would have done the same vs saying “I don’t know how that works so I’m going to go with the standard option.” When I got to the TSA agent and showed her my phone, she pointed to some free standing piece of machinery. I took my phone and began to flash the below barcode to various areas on the device that I figured might have been a barcode reader(I was way off). The TSA agent got frustrated with me and started barking orders at me until I got it right. Needless to say I looked pretty stupid for a bit, but now it’s done and I know how to use it. It serves as a reminder to me that I need to always try the cutting edge stuff to stay an early adopter and not be complacent with what I’m used to. I invite others, including my mother to do the same.

One way or another I came upon an article about Twitter via a blog I had never been to before.  Scripting.com is written by an 80’s software developer and gives insight into tech subjects from that point of view. As I began to explore his other articles, I found one titled “Microsoft rejection letter, 1987” which piqued my interest.

I learned that Dave had created a piece of desktop presentation software called MORE in the mid 80’s that was quite successful as well as very popular to its loyal fanboys.  So successful that Bill Gates offered to purchase the software in 1987 to add to his upcoming office suite but instead deciding to go with a competitor’s product which was called PowerPoint.

This dialog box allows the user to create a ‘blueprint’ that your presentation must live by.  With it you could tell MORE that all headlines needed to be blue with a bold font size of 14pt.  Or that all bullet points should be indented exactly a half an inch from the relative text it was bulleted from.

Every single person that has designed every single page you have viewed on the internet for the last decade, that’s who.  For those who don’t know, web pages are broken into two pieces.  HTML(HyperText Markup Language) and CSS(Cascading Style Sheets) or content and presentation.  CSS like MORE’s Rules dialog box allows web designers to create a blueprint just like an architect will define how the raw materials (whether words or wood) shall be constructed together.  So without CSS, every page you viewed would look like this 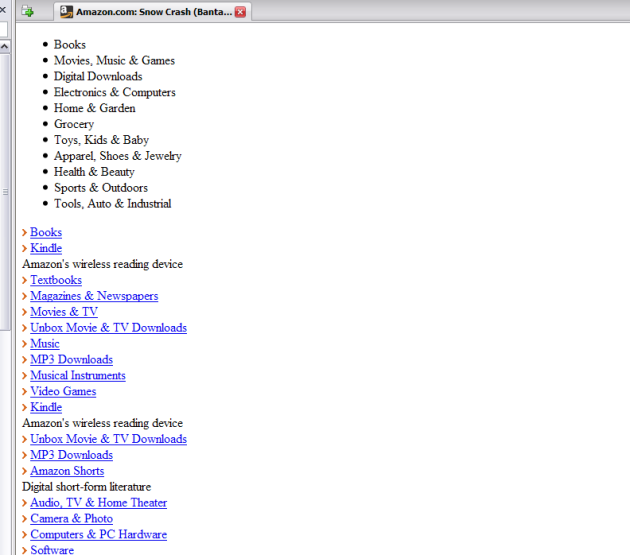 The difference is that MORE came out about twelve years before CSS was released in 1998.  Talk about being before your time….

Though perhaps it was this added complexity that made PowerPoint attractive to the brass at Microsoft.  Today, 24 years after MORE was released and 12 years after CSS, most internet users would probably stare blankly at you if you asked them why CSS is important or worse how to write it.

I StumbledUpon an article about immortal jellyfish and immediately thought about Bruce Sterling’s “Visionary in Residence”.  He has some short stories (all wacky science fiction of course) about “bio-punks” who make upgrades to their (and their pet’s) bodies in a Johnny Mnemonic sort of way.  But, instead of simply being able to store data in your head like Johnny they had some pretty useful alterations.  For example, one of the guys had a pet hog who could eat something, then analyze the ingredients of what was eaten and send the analysis to the owner’s handheld.

All this makes me wonder when we will see people experiment with their bodies in this manner.  When will we see a company that specializes in wiring your brain directly to the internet to bypass a computer terminal altogether?  When will there be a separation between human purists and biotech modified humans, and which group will be alienated?

You might think that modifications that drastic are too far out there for anyone to even think about.  Try telling that to this guy, this guy or Kevin Warwick.

I’d like to think we could tap into a plant’s ability to capture energy through photosynthesis or a horse’s ability to mature into adulthood more quickly coupled with an implant to make all of human knowledge a natural instinct to skip the arduous 20-year schooling process.

Once upon a time, humans learned from tinkering.  To be human, you immersed yourself in the world, observed how things worked, engaged in trial and error and eventually made advancements.  Over the past few centuries, education has turned into what I call a transmitter/receiver relationship.  In the attempt at educating the masses, we’ve standardized an education model where we are told what to learn and when.  To make matters worse, the few times students are allowed to write their thoughts in essay form, they are graded by a biased professor who is more interested in regurgitation of their opinions than having a classful of rebellious thinkers.

I feel the iPad and its inevitable tablet brethren are going to change a lot of how we view education.  If every child had a tablet computer and the right software applications, teachers jobs could morph into “Proctors of knowledge” and give children assistance when they got stuck.  In between however, children could fully immerse themselves in interactive learning that can be constantly measured to make sure everyone is on track and kids aren’t being left behind.

How did I come to this conclusion four days after the launch of the iPad?  I visited Apple’s page dedicated to some of its more interesting apps available at launch.  The three apps I immediately saw educational potential in were the Periodic Table (Elements) app, the Marvel comic app and the Scrabble app.

You’ll need to watch the videos to see what I mean. The Periodic Table app speaks for itself, I want to spend $500 on this device just so I can learn from this app in all it’s visual glory.  The Marvel app caught my eye as well, you can now download comics to your iPad and flick through the story just like a normal comic book.  Imagine a digital comic book about America’s Revolution with questions about the content trickled through the story.   A child could devour historical content and be none the wiser that he was actually learning.  Finally Scrabble brings a fundamentally fun and challenging game into the 21st century that children could circle around to learn vocabulary.  Because the game is housed in a sleek brand spanking new Apple product, why wouldn’t kids want to play Scrabble on it?

It’s about time we realize that education like our other archaic institutions is overdue for a major overhaul.  We should embrace these new form factors of computing and shape the next 300 years of education instead of being stuck in what USED to work.

Thought this was clever marketing, wonder how successful he was…

Today I went through my monthly ordeal of paying bills.  Since I opt out of getting paper bills, this process includes lots of logging into various sites to find out what I owe.  Needless to say the ‘forgot password’ link gets used practically every time.

I try to use the same few passwords or similar combinations of them, but it seems all these sites are out to get me with their ridiculous requirements that are exclusive only to their site.  I recently went bonkers when my standard 9 digit alphanumeric password was rejected by a site that required 10 characters.

I know i’m far from the only one that has this problem.  I frequently walk through our software remotely with customers where they have to log into three different places(our software and the two applications we are integrating).  What do most people do while i’m sitting there looking at their screen via remote screen sharing?  They open up a word or excel document titled ‘Passwords,’ retrieve the information they need and plug it in.

What’s the point of all these secure requirements when people just bypass them?

I’d like to see a web application that allowed me to store the URLs of all the apps and sites I use on the web along with their passwords safely and securely.  To access my gas bill, I log into this new site and click on the link to my gas company.  I’m then redirected to the gas company’s site and am automatically logged in then left alone.

With SXSW Interactive attendees out in full force, foursquare shows the value of location-based apps. Based on check-in data everyone can easily see what venues are currently ‘hot.’